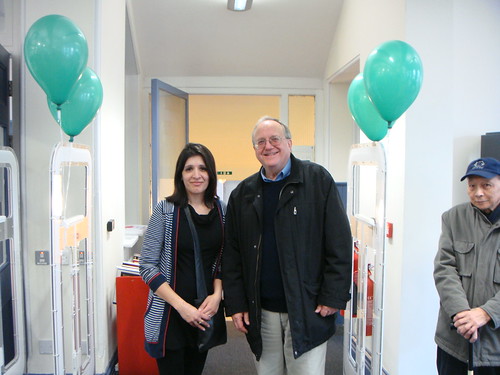 The upper floors of the library are now open to the public due to the new lift which connects all floors.  On the first floor there is a very large computer room that was previously used as a reading room many years ago.

There are many smaller rooms on this floor and the upper floors that offer meeting rooms for hire.  Riverley Childrens Centre has made use of some rooms for their childrens activities already.

The library put on a good show for local children (storytelling and facepainting) which went on through the day.  The refurbishment of the library has taken some time but it was worth it in the end.

Don’t forget that every Saturday from 10 till 12 noon we hold our councillors surgery/advice cenre at the Library.  Why not pop in to see one of us and the new library one Saturday? 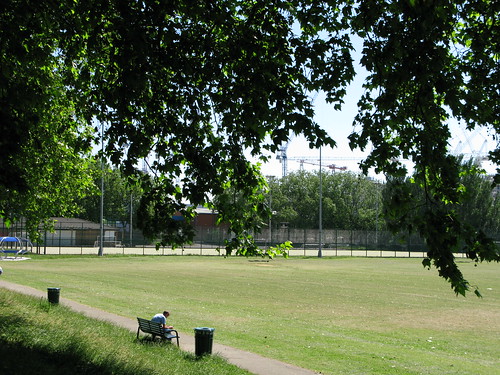 Lib Dem Group Leader Councillor Bob Sullivan was interviewed by the BBC on 7th January about the Lib Dem campaign to save Drapers Field.

Waltham Forest Council intends to rent the playing fields to the Olympic Delivery Authority for nearly two years, to concrete it over and use it for a laundry and storage area. This is despite the fact that Drapers Field is used by over 100,000 people a year and nearby Norlington School uses the playing fields four times a week for sports activity.

The council is so embarrassed about the situation that it stopped any filming in front of the Drapers Field sign.

“This shows that Labour just wants to sweep this issue under the carpet and avoid scrutiny of their decision. In the run-up to the Olympics we should encourage young people to take part in sport – not take away one of the few playing fields and open spaces in the area”.

Labour has still failed to come clean about their plans for Drapers Field after the Olympics.  They say they will consult residents, although they talk about Drapers Field becoming a ‘super park’ there are also current plans which show housing on part of the grounds.

A report to the Leyton & Whipps Cross Community Council gave a clear picture of what is being planned by the Olympic Delivery Authority:

Proposed use of Drapers Field

It will become an Olympic Village Operations and Support Area – provision including catering support, laundry, deliveries and general maintenance.

There will will one main temporary tented structure in the centre, surrounded by smaller temporary buildings. The area will be surrounded by a 4.6 metre weld mesh fence. 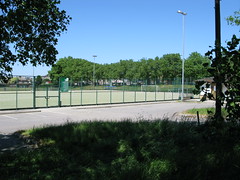 This was scheduled to take place in November 2010. The Council has not said how far this will be circulated. The Liberal Democrat FOCUS Teams will make sure that local people are kept informed, and urge everyone to make their views known.

A formal planning application was expected in January 2011 – now delayed

The AstroTurf pitch, fencing and floodlighting will be removed. Existing topsoil will also be stripped and removed. Destroying facilities that have cost almost £1.5 million to provide, just over ten years ago.

Whole area will be covered in tarmac, temporary drainage and lighting installed.

Village Support Area in operation on a 24-hour basis.

There is no indication when the site will be made available for public use, or indeed what facilities will be restored.

Our petition to Save Drapers Field is still running. Liberal Democrat Councillor Bob Sullivan will be presenting it to the Planning Committee. You can sign up on line at:

Please encourage your friends and neighbours to support this historic site. Paper copies of the petition can also be printed if you would like to collect signatures to support the campaign. 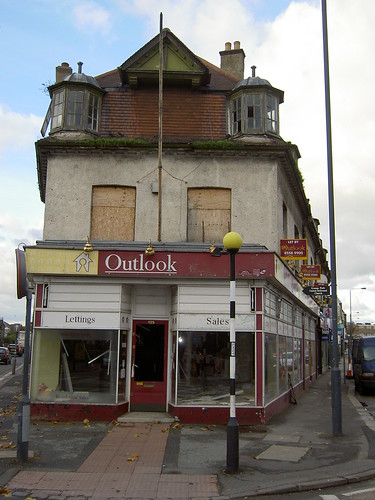 At long last the derelict ‘Outlook’ building – a real eyesore in Leyton High Road, at the junction with Grange Park Road – has been demolished.

While the new building is welcomed, and will be better to look at than the old one, local residents are concerned that there will be no parking facilities in the development.

Local people are calling for the pillar box to be reinstated in Francis Road, where it was previously located outside the local post office.

The Post Office was closed some years ago, despite a vigorous campaign led by the Liberal Democrat FOCUS Team. To add insult to injury, the post box was also removed.

Local campaigner Paul Olford says: “As predicted, the demise of the Post Office has seen the decline of Francis Road. Residents are right to want the Post Office back to help stimulate the retail area. Soon it will be like a ghost town.” 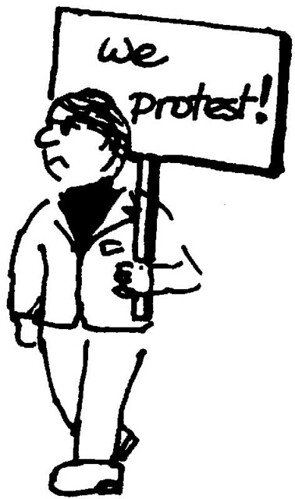 The Council has set up a new department – ‘Residents First‘.

It’s first move was to axe all the local Community Councils. They replaced them with Ward Forums, which appear to be merely an extension of councillor surgeries.

Now they are considering closing the Waltham Forest Direct (WFD) shops  across the borough. The WFD shops, popular with local residents, are where they can get information, advice, visitor parking permits, and get their housing and council tax benefits sorted out without going to Walthamstow.

Maybe they should have called the department ‘Residents Last’! 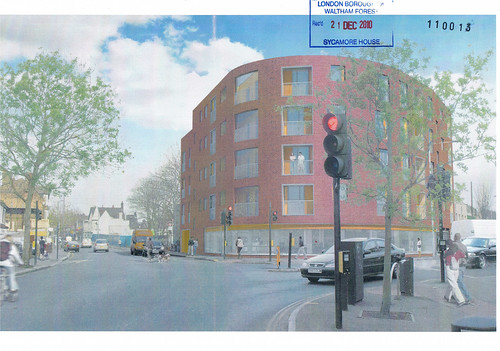 The proposal is to build part 5, part 4 and part 2 storey buildings comprising ground floor commercial/retail space and 24 residential units.  The residential units will comprise 7 x 1 bed, 11 x 2 bed, 2 x 3 bed flats and 4 x 3 bed houses.  There will be no parking spaces except for 3 disability parking bays. 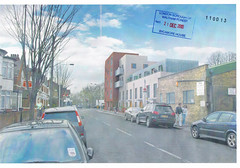 Bob says: “It seems that the only developments in Leyton are for more and more flats, when the real need for the area is family houses.  The flats that have been built have little or no parking spaces.  Parking in our streets has become virtually impossible.”

Below is an objection sent in by a local resident which highlights the reasons why this development should not go ahead.

The building would be out of place and character with the surrounding area and much greater in scale than the surrounding buildings.The materials in the area are relating to mixed conventions, Georgian, Edwardian and Post War. The proposed use of materials in this development with one part completely mottled red brick finish and the other part a completely buff brick finish does not strike me as an intelligent employment of said materials.

The proximity and height of the building will reduce the light filter through from the front windows of properties opposite the proposal.

The Juliette balconies would greatly overlook existing properties opposite.

A major concern would be that an alcohol related business would establish causing Hainault Road area to become a natural congregation area and thus increasing levels of anti social behaviour and crime.

The proposal is located at a very busy junction and I feel it will have the impact of increasing traffic and congestion, leading to more pollution and making the area less safe for pedestrians.

I do not believe there is adequate provision for parking.

The proposal does not meet the appropriate provision for off street parking in accordance with the Waltham Forest Council car parking standards. The area is not within a controlled parking zone.

There is not much provision for larger families in this development and of the 24 units 18 are to be one and two bed units.There is already an oversupply of this type of housing in the area, and I feel a lot would go directly onto the rental market thus encouraging a more transient population.

I would direct your attention to the quite similar Tesco development in South Woodford where there was great difficulty in finding business to take up the retail space.

Good news – The Planning Committee rejected the plan to re-develop the Glyn Hopkin Nissan showrooms on the corner of Ruckholt Road and Oliver Road was refused by the committee.

Residents in the area will be delighted that the plans to build up to six stories of flats with little parking was thrown out.  This is the second time the plans have not been accepted.

Ward Councillor Bob Sullivan said: “I hope that the developers will go back to the drawing board and come back with plans for family houses with parking spaces and not loads of one and two bed flats.” 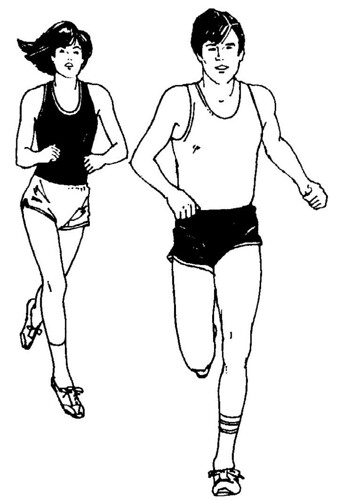 Despite all their proud boasts that Waltham Forest is an Olympic Borough, and with hire charges overall increasing by 3 to 5%, hire of sports facilities is set to soar:

This is on top of selling off Drapers Field to the Olympic Authority for nearly two years. This is a direct attack by Labour councillors on sport in direct contrast to their claim of ‘more investment’ in sports.

An online report by the Waltham Forest Guardian confirms that funding has been approved. This will see the existing buildings demolished, and replaced by a modern facility as part of a £60 million scheme to rebuild fire stations under a private finance initiative. The scheme is due to start late next year, with Leytonstone being part of the second phase.

The fire engines and staff will be relocated to other local stations while the work takes place. A London Fire Brigade spokesperson is reported to have said, “Temporarily transferring fire engines to different stations during construction will not lead to a reduction in our service and allow us to maintain good attendance times.”

As you may have heard, after having been left out of the first round of pre-Olympic ‘sprucing up’ funding, High Road Leytonstone has now been allocated £2 million.

The plans, extending from the Green Man through to the Thatched House, can be viewed on the Council’s website at: www.walthamforest.gov.uk/traffic-schemes

Local campaigner John Howard was pleased to see, at last, there is a proposal to demolish the disused public toilets in Kirkdale Road

CHURCH LANE – he queried the removal of the turning circle and the apparent disappearance of the public car park, while a proposal still remains for a ‘play area’.

The Council has advised that this plan is to be redrawn to show continued access to the car park. 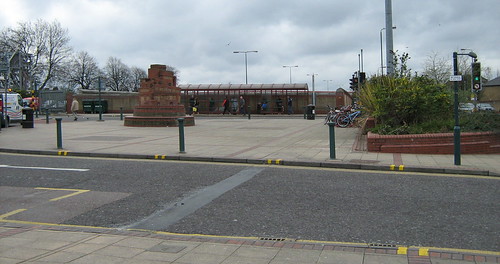 THE PLAZA – John questioned the suggestion to reroute the road to run between the sculpture and the flowerbed. Regular users of this area will know that there are aften more than one bus at each bus stop, and the W16 drivers have a break before returning to Chingford. Additionally, the vehicle access routes to the car park and the LT building were not shown.

He has now been advised that London Buses supported concerns about the reduced road layout on The Plaza, and a site meeting was being convened to resolve the problem.

The FOCUS Team is watching developments.