Read more on this

Liberal Democrat councillors are pressing the Government to provide the money for new school buildings for our local children.

“Anyone who has visited schools such as Leytonstone, Norlington, Connaught and George Mitchell knows how much new buildings are needed. We owe it to the children of our borough to do all we can to provide them with the high quality education they deserve. This includes making sure that they can learn in decent surroundings,” said Liberal Democrat and  Forest Ward Councillor Farooq Qureshi.

The Liberal Democrat group is hugely disappointed that the cancellation of the Building Schools for the Future (BSF) programme has hit local schools so badly. It is an enormous shame, but if Labour had made faster progress with the BSF schemes since 2003 we would not now be in the situation where more Waltham Forest schools have been stopped compared with other boroughs.  However Lib Dem councillors believe the most important thing is what happens next.

Local campaigner Samina Safdar says: “BSF was a cumbersome, bureaucratic and expensive way of funding school buildings which funnelled money into the pockets of consultants and private contractors. The government has pledged to continue to invest in school buildings and the Liberal Democrats will be at the forefront of the campaign to make sure that Waltham Forest schools get their fair share of this spending.” 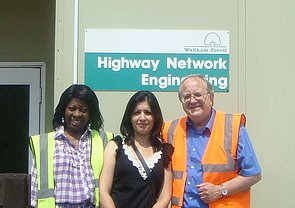 You may have read the news a few months ago, that Leyton High Road and the Ruckholt Road area are due to be given a facelift thanks to the Olympics.

Cllrs Sullivan, Smith and Qureshi from Leyton ward were invited to a meeting recently; to take a look at the changes that are being proposed to parts of Leyton High Rd over the coming years as we build up to the Olympics.

Almost £5 million is set to be spent in the area. Changes that are being proposed include new seating areas, shop frontages and lighting along the High Rd, in particular.

Although they are in their initial stages and subject to a consultation (which I am told is going to take place very soon) , some of the planned changes will, transform the area and give it a much needed facelift. Leyton and Wanstead Liberal Democrats have reservations, about a few proposed changes around the Leyton station area. The problems around Drapers Field and redevelopment are seperate from these proposals.

The officers concerned, visited the Leyton & Whipps Cross Community Council which took place last month and outlined initial plans to the members of the public who were in attendance.

”If a mistake at the count led to the wrong councillor being elected it is a very alarming error. The Liberal Democrats have consulted solicitors with experience in this area with a view to challenging the result. It is vital that residents can have confidence in the integrity of the local democratic process.”

“Labour is running scared of proper scrutiny,” said Liberal Democrat Group Leader Bob Sullivan, who also used the meeting to raise questions about primary school places, the EMD cinema and the Arcade site.“It is a bad sign that the first act of the Labour administration is to close down debate and discussion. They don’t seem to realise that residents expect councillors to work together on the many difficult challenges facing our area. Despite the problems caused by Labour’s actions the Lib Dem group will continue to speak up for local residents and fight for their interests.”Until last night’s Annual Council Meeting seven councillors served on each scrutiny sub-committee. This would have given the Liberal Democrats one seat on each committee. A Liberal Democrat attempt to halt the change was defeated by the Labour majority.The six scrutiny sub-committees deal with:

Leyton and Wanstead Liberal Democrats responded to the need to find savings at Waltham Forest council and Labour councillors’ decision to get rid of the council’s Chief Executive. Lib Dem Leader Bob Sullivan said:Gordon Brown’s economic legacy means that all levels of government have to make tough choices. Labour in Waltham Forest has got off to a bad start by seeking to get rid of the serving Chief Executive at enormous cost to the local taxpayer.The Liberal Democrats will campaign to protect crucial services that affect people’s lives. We will support measures to improve efficiency and cut out waste, bureaucracy and unnecessary spending.The council spends hundreds of thousands of pounds each year on marketing and communications and could save more if it employed fewer interim staff and consultants. It must make progress on the Arcade site and other projects where every delay costs local taxpayers money.It is vital that the measures announced by the council are considered properly by councillors and I will ask for full details to be submitted to the relevant scrutiny committee.

The news has sparked anger among local Lib Dem campaigners who say the all-weather pitch and playing fields are used by over 9,000 people every month. Information obtained by local Lib Dems shows that Labour Council Leader Chris Robbins has negotiated to lease the playing fields to the Olympic Delivery Authority (ODA) for possible use as a VIP car park or other Olympic related uses. As a result local children and football clubs will have nowhere to play in Olympic year, while international athletes compete for medals just a few hundred yards away.

Local Lib Dem activist Joe Dyer said: “To allow Drapers Field to be given over to the ODA and turned into a car park would be a travesty for local clubs and schools. The Olympics should be used to encourage sport, not destroy it. Under Labour the Council is in danger of missing a huge opportunity. There are no other all-weather pitches in the immediate area. This could cause enormous disruption to users.”

Plans by the Islington & Shoreditch Housing Association to build 36 flats on the site of the derelict Outlook building in Leyton High Road have been delayed. They are still waiting to get the OK for funding which is expected by the end of June. Residents and visitors to Leyton will now have to wait another few months before this unsightly derelict building gets demolished.

The plans for building flats and houses on the site of the Glyn Hopkin car showroom on the corner of Oliver Road and Ruckholt Road have been with the planning department for many months. The delay in getting the plans agreed maybe because of the many objections by local residents.

Leyton and Wanstead Liberal Democrats and the Leyton Focus Team says: Lack of parking spaces in the plans have angered local residents, who find it virtually impossible to park in their roads. These plans will put even more cars onto their local roads.

After months of waiting and much work by the Cathall Focus team, the new bus stop in Cathall Road is almost finished. Situated outside the Cathall Leisure Centre, it makes getting to and from the centre much easier by bus. Several sites were looked at by the Council and Transport for London but discounted on safety reasons.

Focus team member Paul Olford said “It’s about time this bus stop was completed after the need was highlighted last year by local residents. In particular, it will make it easier for disabled people to get to the Leisure Centre”.

Britain is set for real change with the Lib Dems in power for the first time in decades.

Labour chose to go into opposition rather than do a deal with the Lib Dems. The deal the Lib Dems have struck means that vital services we all rely on will be protected. There will be more money for schools and real action to clean up our broken politics.

Lib Dem Leader Nick Clegg said, “With the Lib Dems in power, Britain will get real change – just as we promised in the General Election. Things won’t be easy, but with the Lib Dems in Government, local people will have a strong voice speaking up for them in Westminster.”

At the election, the people chose to give no party an overall majority. People wanted politicians to put aside their differences and work together to sort out the nation’s problems. But Labour refused to talk seriously about a deal with the Lib Dems – they preferred to let the Tories run things.

Britain needs change – the Lib Dems will deliver this.